Distribution of Mola rock crab M. edwarsii extends from the Arica region to Magellan Strait in Chile (Aedo et al. 2009) (Martinez 1986 in (Pardo et al. 2017)), and to the Beagle Channel (Vinuesa et al. 1999). The species inhabits intertidal depths of 42 (Henriquez y Bahamonde, 1976 in (Pardo et al. 2017)) and up to 130 m deep (Campos, 1992 in (Pardo et al. 2017)). Studies conducted in various locations of the Chilean coast indicate that the population is genetically homogeneous, with high connectivity along with its geographical distribution; likely owing to the species’ high fecundity and larval dispersion capability, among other unique reproductive characteristics (Rojas-Hernandez et al. 2014)(Ferrada Fuentes et al. 2018).

The vast majority of Chile’s production of mola rock crab is reported in the Los Lagos Region (X), followed by the Aysén (XI) Region, accounting for on average 78% and 19%, respectively, of the total national mola rock crab catch (Sernapesca Yearbook data, 2018-2020). Very minor catches are also reported in other regions, primarily being the Biobio (VIII), De la Araucania (IX), Los Rios (XIV), and Magallanes and Chilean Antarctica (XII) Regions. In the Los Lagos (X) Region, the Bay of Ancud, to the north of Chiloé Island, has historically been noted as the area of greatest importance in terms of landings (Pool et al. 1998)(Aedo et al. 2009)(Yañez 2017); whereas in more recent years, inland ports on the eastern central coast of Chiloé Island, and Quellon, to the south, have contributed a greater share of the catch (Ferrada Fuentes et al. 2018)(Espíndola and Olea 2019)(Canales et al. 2020)(Sernapesca 2020). Historical fishery data prior to the 1990s is lacking for the species, as up to this time, Chilean administrators and fishers considered mola rock crab only under the undifferentiated resource category of “jaibas” (crabs) (Yañez et al. 2015).

Regulation of the fishery is primarily administered at the national level (Pardo et al. 2017)(Yañez 2017)(Yañez 2019). However, there are management committees, comprised of government and stakeholder members, in the Los Lagos and Aysén Regions (Subpesca 2020); and there are some specific regulations for the Los Lagos Region (MEFT 2011)(Cavieres et al. 2016)(Yañez 2017). The Instituto de Fomento Pesquero (IFOP) publishes stock assessments for some regions, most consistently for the Los Lagos Region (Yañez et al. 2015)(Yañez 2017)(Yañez 2019). Since 2015, the Los Lagos Region assessments for mola rock crab have considered only data from Ancud Bay; a decision based on the objective of exploring smaller-scale processes for extrapolation to the entire region, and a theoretical understanding that populations of the species in certain oceanographically unique locations, whether genetically distinct or not, may function akin to a biologicially distinct unit (Yañez 2017).  However, there is remaining uncertainty as to whether production from other areas of the region may influence the population in Ancud Bay (Yañez 2017)(Yañez 2019). A management strategy evaluation considering individual stocks in Ancud Bay and Dalcahue (eastern central coast of Chiloé Island) was recently conducted under the Chile Stone Crab – Trap fishery improvement project (FIP) (Canales et al. 2020). 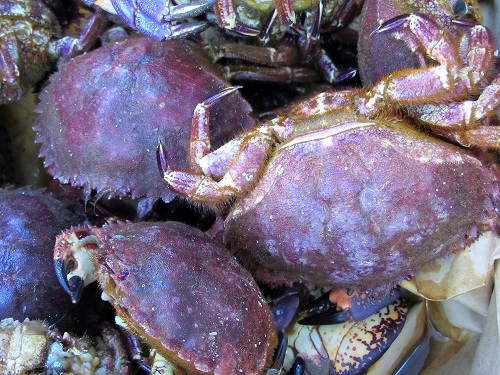