The information quoted below was extracted from IOTC 2017. Albacore is a highly migratory temperate tuna living mainly in the mid-oceanic gyres of the Pacific, Indian and Atlantic oceans. Unlike for the Atlantic and the Pacific, in the Indian Ocean, there is probably only one southern stock, distributed from 5ºN to 40ºS, because there is no northern gyre. It appears that juvenile albacore show a continuous geographical distribution in the Atlantic and Indian oceans in the north edge of the subtropical convergence. Albacore may move across the jurisdictional boundary between ICCAT and IOTC. For the purposes of stock assessments, one pan-ocean stock has been assumed for the Indian Ocean. The IOTC is the assessment body in charge of performing regular assessments of this stock.

The FishSource profile is based on a single Unit of Assessment Unit (Indian Ocean) and a single management Units (IOTC) where different fleets from several countries (including relevant distant water fishing nations such as China -including the province of Taiwan-, Japan and Korea) are operating  (see Fisheries section below) 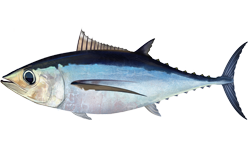